How does a mobile wallet work? Should I trust it?

Good question for an emerging technology! A mobile wallet (or cyber wallet, as some would term it) (or cyber wallet, as some would term it) is a relatively new invention a la the internet being embraced by popular heavy-hitting companies like Google and Visa. It works by allowing its users to make payments at POS at stores and other such place all by taking out their Smartphone. On said phone, there will be an application (“the wallet”) that stores the user’s credit or debit information used in transactions.

Thus, the phone replaces the need for an actual physical wallet. Hence the “cyber wallet” title. Google just revealed theirs to the world and Isis, the result of a hyped collaboration between popular telecommunications services AT&T, Verizon and T-Mobile, will be out early 2012.

The problem comes about the level of trust one should embrace with the card. In the past, even credit cards have an aura of uneasiness to them. What happens if those cards’ private data should be spotted by the wrong people? What if someone steals your card?

These are age-old concerns since the credit card itself has been a viable concern. And thus, with the cyber wallet, they are simply updated to meet our new (and sometimes scary) era.

You can trust a “cyber wallet” as long as you are careful with it. Again it comes down to exercising a lot of common sense on your part. However, because of the scope the internet allows us, the danger is somewhat amplified.

A savvy cyber thief could figure out how to hack into the working of your phone and steal your personal information, if you are not cautious. Malware is easy enough to get installed on your phone, as it is your computer (such as spyware, for example). Android malware - on one of the most popular Smartphone devices - is growing at an alarming rate, as cited by the website Spyware Help Center.

An expert at Credit-Land.com said the following addressing cyber/mobile wallets and the safety concerns surrounding them: “Yes, you must be wary when making a transaction with a mobile or cyber wallet. There are a lot of little threats that come with the territory, too, which seem deceptively simple. Your credit card information, or debit card (be that the case), is some of the most personal information a fraudster can access and then wreak havoc with. And because of the interconnectedness of the cyberworld, that information can travel far and fast.”

Google Wallet itself will be hitting the market soon enough and happens to offer a lot of incentives to get people to use it, such as instant coupons and merchant rewards programs, like a credit card would. 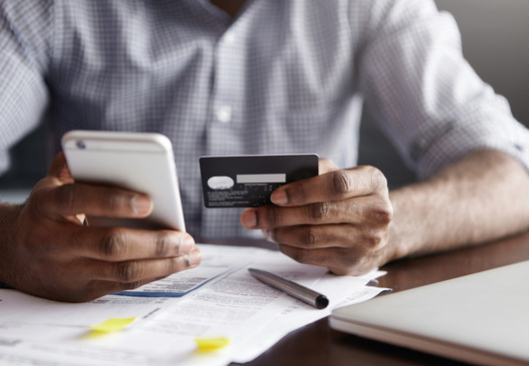 Merrick Bank offers that can help you build or rebuild credit

Merrick Bank is a top 20 credit card issuer in the U.S. that offers both unsecured and secured...